Bethlehem, PA – Trans-Bridge Lines recently had the honor and privilege to donate a bus to the Museum of Bus Transportation in Hershey, PA. Bus 50 was dedicated to the museum on Saturday, June 5, and was presented by Brendan Stanczyk, Safety and Training Supervisor for Trans-Bridge Lines during the museum’s Spring Fling event.

The bus, a 2000 G4100 is a VIP coach, complete with back lounge, restroom, and galley kitchenette area. The bus was number 14 of only 29 ever manufactured. Trans-Bridge Lines owned two, but unfortunately lost the second bus to fire in September 2008. Bus 50 was parked next to it, sustaining major damage, however in 2020, Trans-Bridge Lines’ shop employees worked tirelessly to restore the bus.

“Our team put in many hours to meticulously refurbish this bus. They did an outstanding job on the restoration,” said Tom JeBran, President of Trans-Bridge. 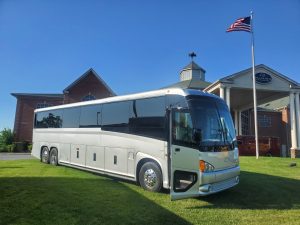 “When I drove this bus to Hershey for the dedication, it was the first time it was on the road since 2008, and it drove like a dream,” said Stanczyk.

The bus, which only has about 175,000 miles on it, was named Bus 50 in honor of the 50th wedding anniversary of the late James Jebran, Sr. and his wife, Camille JeBran. Camille, who is now 103-years-old, started in the bus industry more than 80 years ago.

This is the second bus Trans-Bridge Lines has donated to the Hershey bus museum, with the first being a 1987 MC-9, Bus 5409.